'Geocache' is derived from 'geo', which means earth, and 'cache', which means a hidden item or treasure. In the early days, similarities were drawn between geocaching and the 160-year-old game of Letterboxing, which uses clues and references to find hidden boxes.

Geocaching was conceived shortly after the removal of Selective Availability from the Global Positioning System (GPS) on May 2, 2000, by the US Government. This improved the accuracy from the area of a football field to 2-3 metres, allowing for a container to be specifically placed and located. 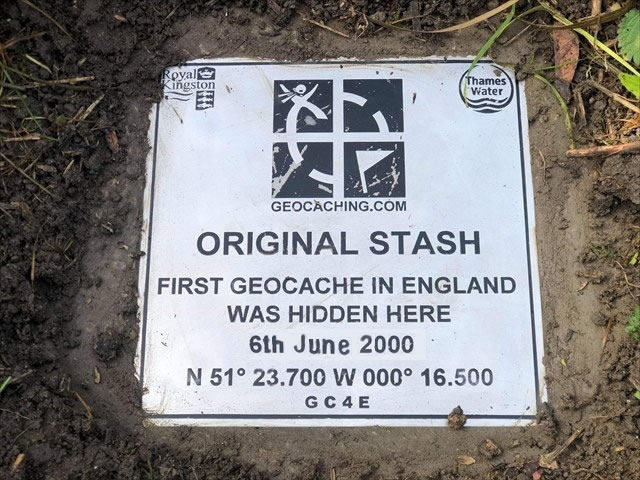 The first documented placement of a GPS-located geocache took place on May 3, 2000, by Dave Ulmer of Beavercreek, Oregon. The location was posted on the Usenet newsgroup sci.geo.satellite-nav as N45° 17.460 W122° 24.800. By May 6, 2000, it had been found twice and logged once by Mike Teague of Vancouver, Washington. According to Dave Ulmer's message, this geocache was a black plastic bucket that was partially buried and contained software, videos, books, food, money, and a slingshot. A geocache and plaque called the Original Stash Tribute Plaque now sits at the site.

The first geocache placed in the UK was by an American cacher, 'Steve', who planted a geocache at Berrylands, Surbiton, Surrey and called it, appropriately, England’s First! (GC4E). Unfortunately, the geocache is no longer there, but a tribute plaque commemorating it was placed at the original site by local geocachers under the guidance of Thames Water Community & Recreation Services and Royal Kingston Council on its 10th anniversary.

Back to What is Geocaching?

Back to Media Enquiries