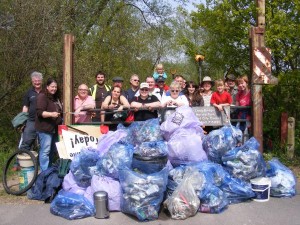 Summary:
The event started at ~10 am with a mustering at the published GZ. Safety instructions provided by OxClean were read out and distributed to attendees. Litter pickers, high vis vests, gloves and rubbish bags were distributed and attendees were signed into the event (listing what they had borrowed). Litter was then collected from both sides of Donnington Bridge/Weirs Lane area with the filled bags dropped off at the published GZ for later collection by the council. Three needles/syringes were found during this clean up and a special call was put through to Oxford City Council for their representative to make a special collection of these items. At the end of the litter pick we reconvened at the GZ, took some photos, collected all distributed gear and headed off to the Prince of Wales pub in Iffley for lunch where stories were shared and hungry stomachs were filled!

What next:
Next year it is hoped that a CITO event can be arranged to coincide with OxClean’s Spring Clean (5th March 2011). OxClean were a tremendous help in organising this event and it would not have happened without their support. Unfortunately I will be leaving Oxford (and the UK) in September, so I won’t be able to organise next years event. I have collected a body of information regarding the organisation of this event which I am quite happy to share with anyone who is interested. I’m also certain that another event could be arranged on the official CITO day.