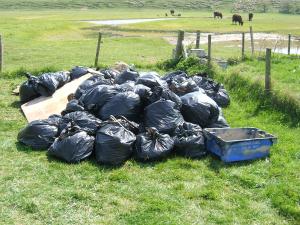 Summary:
There were approx 55 cachers and a few members of the public who asked if they could help.(muggles who now know what a great bunch of people cachers are and what they get up to). In total there was about 200 sacks of rubbish collected

This year was the best one of the three CITOs done in this area….the weather was excellent for once!!

It was extremely well organised and as someone said to me, “it all went so smoothly yet no-one seemed to be directing anything”

Will there be another next year??? Reading the logs how can there not be!
As one cacher logged “I never knew picking up rubbish could be such fun”

We now have a super relationship with the rangers of this beautiful area. Initially they knew nothing about geocaching and were a bit guarded. Now they think we are great, so much so they approached me to see if we could help this year. A nice touch, while we were picking rubbish the Country Park volunteers prepared a super picnic, including a barrel of the local bitter, as their way of saying thankyou for our work.

The other positive to come out of this was the head ranger asked me about caches on their property and we discussed a couple of features. He said he would have to clear it with the management. Now there are three management groups involved and Robin, (the ranger) e-mailed them with details of Caching and suggested he meet with them to answer any questions. The result is I have now placed 4 caches on the site and and several managers involved with natue, conservation and country parks are aware of geocaching and geocachers.

The rangers are delighted with the arrangement we now have, they used to advertise in the local press and hope members of the public would turn up. Now Robin e-mails me the day in April the tide is right, and allocates a trainee ranger to liase and organise. We keep in touch and they know exactly how many helpers have posted a “Will Attend” log. The rangers organise a ranger to small parties and use their land rovers to take us to our designated areas. When the area is clear they take us buck to their HQ and there is this wonderful picnic waiting us!

What next:
So will there be another?? Give you three guesses.

If anyone is thinking about organising such an event thay can contact me if they need help or advice…my advice will be if you want to go home at the end of the day feeling 10 feet tall go ahead…….and once you have done the fisrt one the rest is easy. I can send the coding for the cache page if anyone would like it, it was donated to me by another cacher.